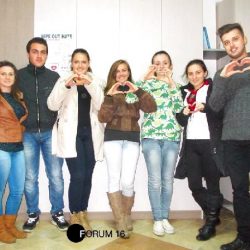 The activities that the Association for civic activism FORUM 16 organized though the National No Nate Speech Movement were titled “From Youth to Youth with Love.” From November 2013 to April 2014 eight workshops were organized. The workshops were divided into two parts. During the first part, it was presented the concept of human rights and[…]